A Gibson Girl in Oz

On May 11, 1902, the Chicago Sunday Tribune announced that rehearsals for The Wizard of Oz would soon begin at the Grand Opera House, under the direction of Julian Mitchell. The management also mentioned “. . . with an air of mystery, that Charles Dana Gibson’s original model for the 'Widow' in his series of pictures entitled A Widow and Her Friends, has been engaged to make her stage debut in The Wizard of Oz.”

This gossipy tidbit would certainly have caught the eyes and imaginations of readers in 1902. Charles Dana Gibson (1867-1944) was at the height of his popularity as an artist. Gibson created the “Gibson Girl” in 1890 for Life magazine. In 1894 he began publishing luxurious coffee-table books reprinting his exquisite pen-and-ink drawings of high society and his “Gibson girls” exploring life, relationships, independence, and, in subtle ways, their sexuality.

In 1901 Gibson drew a new series of drawings, A Widow and her Friends. The “Widow” was a stunningly beautiful young woman, who lusciously goes through mourning, weighs a possible career, and, well, is a Gibson girl or, at least, a Gibson woman.

So did the management of the Grand Opera House truly secure the model who had posed for the “Widow,” or was this just a bit of publicity-seeking “name” dropping? Or rather publicity seeking “name-withheld” dropping—as the Wizard of Oz article continues “ . . .[the Gibson girl model] has made it an absolute condition that her real name and identity be kept strictly secret. Mr. Hamlin is said to have pledged his word.”

This story has some legs, like presumably the Gibson girl does, though of course she would never show hers. On June 8, 1902, the Chicago Inter Ocean reported, “Manager Hamlin of the Grand opera-house is willing to wager real money that he will place on exhibition in the chorus of The Wizard of Oz next week the only and original Gibson model for the widow in the artist’s series of pictures known as The [sic] Widow and Her Friends. . . . According to the Chicago manager, he was in New York recently, when he heard that the real Gibson widow had determined to become a sextet or an actress, or something back of the footlights. He investigated, and discovered that the young woman’s name was Jane Blair, that her beauty had not been overestimated, and that she was really anxious to make her stage debut.”

Hamlin interviewed the girl and found “that Miss Blair’s record was genuine, and the engagement followed. She has been rehearsing with the chorus of The Wizard, envied by the less beautiful of the girls, and admired by the promoters of the entertainment. She declares that she is glad to get her first training in Chicago, as her society friends in New York might try to play some joke on her if she made her debut there.”

The young woman chose to appear in The Wizard of Oz as Jane Blair. Her photo appeared in the June 8, 1902, issue of the Inter Ocean—and she bears a good resemblance to the “Widow.”

On June 15, 1902, the Inter Ocean updated Chicago on the chorus girls in the forthcoming Wizard of Oz: “Jane Blair, [is] another example, the only genuine model for the Gibson widow, who is going to be noticed for her beauty, it is said, as well as her reputation as a famous model.”

Jane Blair performed in the chorus of The Wizard of Oz during the summer of 1902. She played a Munchkin, a Poppy, a Lady in the Wizard’s Court, and a Dreamland Maid. I’ve not been able to identify her in any of the photos from the original Chicago rehearsals or the production photos.

On August 24, 1902, the Jane Blair story made the news again. The Buffalo Courier published a short piece on the backgrounds of some of the Wizard chorus girls, including “ . . . the nom de theater of Jane Blair conceals the identity of a daughter of one of the first families of New York.” And that’s the last one hears of Jane Blair.

So did this young woman from the upper-crust of New York society really pose for Charles Dana Gibson? She might have. She is pretty enough, and the story kept on going that summer, so maybe she did! 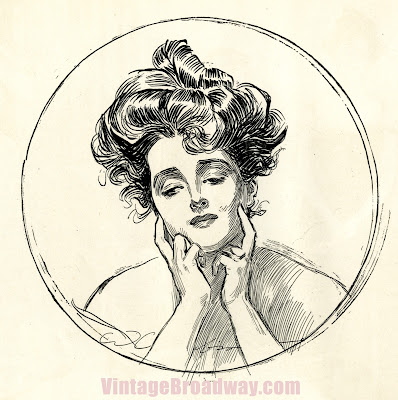 One final note: There was another actress named Jane Mae Blair (sometimes credited only as Jane Blair) who appeared in Miss Bob White and The Messenger Boy around this time. But she is known to be elsewhere during the Chicago run of The Wizard of Oz and is thus a different Jane Blair.