Anatomy of a Forgery

[An earlier version of this post was published July 9, 2019, on Hungry Tiger Talk under the title:
"Martinizing History, the Story of a Poster"]

Back in 2018 I was offered what was believed to be an original poster from the 1903 Broadway Wizard of Oz musical (see photo below). The provenance seemed ideal, the poster having been purchased by the current owner from Brenda Baum, widow of L. Frank Baum's third son, Harry Neal Baum. The Baums had run a Wizard of Oz Lodge named Ozcot, which hosted the earliest Oz club conventions.

From the seller's description, I thought it was going to be another example of a well-known Wizard of Oz poster at the New York Public Library (seen at left). Indeed, I've had a black-and-white photocopy of the NYPL poster for over twenty years, which used to hang in my studio in San Diego. Curiously, the poster I'd been offered was mounted to a piece of green-painted plywood with a wooden frame around it. Hmm...

Note especially the bottom of the picture of Dorothy. Dick Martin has only left the part of the vegetation that is not overlapping the red because that part of the vegetation was obscured in the photostat and he'd apparently not traced it in such detail as to preserve the entire image.
Here's another example: the title THE WIZARD OF OZ was printed in both red and green - producing a rather ugly brown. But the original NYPL poster is not in perfect registration and the title lettering is quite unattractive. But in a photostat of the NYPL poster, both red and green will reproduce as black, so the text of THE WIZARD OF OZ is thicker and blobbier. You can see below that the Martin version of the poster for American Book Collector is reproduced directly from the NYPL version of the poster, as the shape of his lettering matches the shapes of the combined red AND green inks. I have digitally prepared a version of the word OF showing only the green ink. If the offered poster had been printed in 1903, the printer could have simply used the green printing plate with black ink and gotten a crisp, accurate reproduction of the original typography.
If the show's producers had wanted to do a black and white version of the poster in addition to the green, red, and white version, all they really had to do was use black ink on the green printing plate (and move the red text block over to the new plate). There is ZERO reason to redraw the sections backed by the red, unless you're working from a black and white photostat of the green and red poster. It is the incredibly time-consuming workaround to achieve a clean drawing that most proves the poster a 1960s era creation by Dick Martin.So, in my opinion, that's it - Dick Martin modified the stat of the poster he made from the NYPL copy, fancied up the lettering of the character's names, and after he was finished with his modified artwork, he presented it to Harry Baum as a decoration for Ozcot Lodge. Then Brenda Baum sold the poster to my friend who innocently believed he was buying an original 1903 Wizard of Oz poster.
I passed on purchasing the poster.
Sadly, Dick Martin's cleverness and creativity have misled many people and often resulted in some extreme and embarrassing disappointments over the years. Dick Martin faked John R. Neill art, which he presented as gifts to friends on several occasions; he transformed 1940s era dust jackets into very rare first edition dustjackets; and he "invented" vintage advertising posters. One fake poster for Baum's 1906 fantasy John Dough and the Cherub was reprinted in the modern Dover Books edition of that title and presented as genuine period advertising. Martin did not try to profit from his fakes, he made them for fun, as gifts to friends, sometimes perhaps simply to see if he could succeed in his unethical and unscholarly fun. Alas, with some of his "creations," ascertaining whether they are real, partly real, or wholly invented can be very difficult.
But to end this on a more positive note, I'd like to explore a bit more history in how the original poster came to be. The source of the artwork for the original 1903 poster is a drawing printed in the February 2, 1903, New York Evening Telegram.
This artwork was drawn by Henry C. Coultaus (1862-1923), a cartoonist for the New York Evening Telegram, who specialized in drawing illustrations for that paper's Drama section.
Coultaus's Wizard of Oz illustration is for the paper's "What the Playhouses Offer" listing. Note that this original version of the artwork is different than all other versions. The names of the actors appear under the character drawings - not the names of the characters themselves.Quite probably, the Wizard of Oz's producers were taken with the newspaper artwork and asked to turn it into an inexpensive poster. But those actors names! Some of them were not even with the show anymore by the 23rd week when the poster is first known to have appeared. And besides, the cast changed frequently enough that there would be little accuracy or even point in saying who played whom. So the producers modified the original design - probably having gotten a photostat from the Evening Telegram, and (perhaps in a rush) they painted out the actor names and simply "typed" the character names onto the Evening Telegram's photostat.This is interesting, I hope, and not too confusing: the newspaper version is about HALF the size of the poster as it was eventually printed. If the "typing" to replace the actors' names with character names was done on the paper's photostat by an actual typewriter, it would explain why the Courier lettering of the poster looks so much like it was done with a typewriter - it was! At first, I'd assumed it couldn't be, because the font was too large to have come from an actual typewriter - but blowing up the newspaper-sized stat (with normal typing on it) would result in the oversize Courier font found on the poster.I really do wish the offered poster had been genuine. Owning an original poster from the show is still a dream of mine. And you know, a large 58-year-old photostat, mounted on green plywood, created by an official Oz illustrator, and from the personal collection of Harry Baum isn't a bad thing! But it's not the hundred-and-eighteen-year-old poster I had so very much wanted it to be.
UPDATE: Early in 2021 I was able to obtain a genuine poster from the show and from its original run at the Majestic Theater. You can read all about that poster by clicking here.
Copyright © 2022 David Maxine. All rights reserved.
Posted by David Maxine at 4:06 PM No comments:

During the original Broadway run of The Wizard of Oz in 1903, much of New York City had literally ruptured with progress.

The new subway system chiseled streets into chasms, the new and improved water, gas, and electrical infrastructure riddled the city with trenches and holes, and all of that was topped-off with a building boom.

The New York Sun of September 13, 1903, reported: "Miles upon miles of pavements torn up to repair gas and water mains, lay cables and install power . . . New Yorkers are getting used to the chaos in the streets. They now take it as the natural order of things. They scale peaks and mountain ranges of litter, climb around isolated upheavals of earth and building materials, leap over yawning chasms and look out over scoriated wastes in an absentminded way. . . . on July 1 there were more than twenty-five miles of trenches open."

Getting a ticket to The Wizard of Oz, then playing at the Majestic Theater just southwest of Central Park, must have provided a delightful escape from the noisy, smelly, and dangerous mayhem.

A curious image of New York City in 1903 recently surfaced, featuring an easily missed Wizard of Oz connection. Can you spot it? Click the image below to begin your hunt.

The image above, dating from August 1903, taken with a wide-angle lens which created a curve of sorts, warps our view as we look north across 42nd Street into the intersection then known as Longacre Square. Seventh Avenue on the left side of the hole, angles toward center, mirroring Broadway, angling toward center on the right side of the hole.
The gaping chasm is the former foundation of the Pabst Hotel, recently demolished, and will soon become the site of the Times Building (see image at right), a new home for The New York Times. Shortly after the Times moved into the building in January 1905, Longacre Sqaure received its new name: Times Square.
So, did you spot the Wizard of Oz connection? At the extreme right-hand side of the image, one can just make out a large billboard-sized poster advertising The Wizard of Oz. You can see another large sign advertising Juicy Fruit Gum just beneath it. 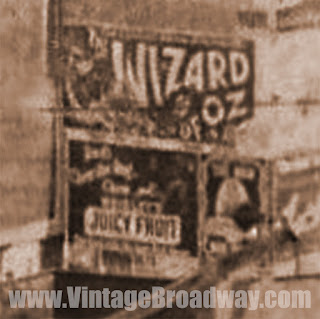 In another well-known photograph, this same poster was slathered over the entire side of a building.
The Portland Oregonian of August 2, 1903, reported that "James M. Rhodes, advertising agent of the new Majestic Theater . . . recently accomplished a unique feat of billposting by covering the immense wall fronting Fifth Avenue at Thirty-sixth street with stands of The Wizard of Oz. No less than 315 sheets of paper were posted on the wall, the stands being 31 sheets long and 15 sheets high." The article stated it was one of the largest stands ever posted in New York. In gratitude, the manager of the Majestic Theater, John S. Flaherty, presented the advertising agent with "a handsome gold-headed cane."
Alas, no copy of this wonderful poster is known to survive, quite probably because it was a multi-sheet image. I've begun a small project to restore the poster using high-res scans of the photograph, above, to be included in my book when completed. Below is one of the better images of the poster.
This imagery of this poster is very intriguing, featuring Dorothy (at far left), the Scarecrow and Tin Woodman, along with the Cowardly Lion and Imogene, the frolicsome heifer, being blown about by the Tornado. Imogene is a bit hard to see, her head visible directly below the downstroke of the W in WIZARD. Pastoria's circus hat floats along under the O in OZ. 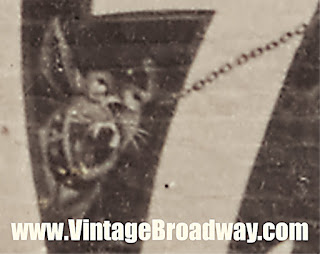 But the most unusual thing about the poster is an additional mystery animal peering out between the I and the Z in WIZARD. It appears to be a dog, given the whiskers, canine teeth, and what looks like a dog collar with a chain stretching across the Z in WIZARD.
There is no other evidence for a dog being in the show this early in the run. Did the poster artist know Baum's book and want to add Toto? Might there have been a "flying dog" image in the cyclone projections? Or a chained-up dog in the Kansas scene? Oddly, Imogene seems crammed into the composition. The poster would have been better had Imogene been placed where the mystery dog appears, thus leaving some empty space under the W and between the Cowardly Lion and the Scarecrow and Tin Woodman.
Another dog-gone mystery!

Posted by David Maxine at 8:11 PM No comments: