Herbert Jarvis Goes to the Show! 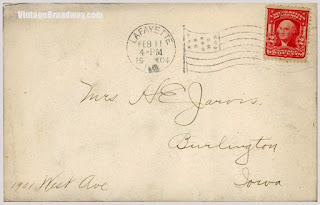 I much enjoy when I run across a contemporary audience reaction to The Wizard of Oz. One assumes there is no bias, such as an official reviewer or critic might have. Alas, most mentions of the show, like the one below, are usually lacking in detail.
Today's blog is a brief look back in time via a letter I recently acquired, in which a young man named Herbert Jarvis wrote to his mother in Burlington, Iowa, on February 11, 1904, from Lafayette, Indiana:

Did you think I'd forgotten all about you? Well I haven't by a good deal.
Of course Fred saw you at the beginning of the week, so you knew that I spent Saturday and Sunday with him. They were having sales of clothes and so I got a very good pair of trousers for $3.50. I also got myself a pair of shoes.

We were out at the fairgrounds Sunday - Lute Liebrick and George Lilley were with us. Lute and I took pictures. Saturday night I saw the "Wizard of Oz." It was fine and I enjoyed it more than anything else I've seen, I believe.
Tuesday night F. Hopkinson Smith lectures on "Old Plantation Days."I think it was the best in the course so far. I took Martha Smith.
Had I told you that the young men of the Presbyterian church were going to give a Valentine social Friday night? I was chairman of the committee that had charge of it. We've had to give it up because Mrs. Horn's father died and the funeral is to be at the church Friday afternoon. Mrs. Horn is the teacher of our young men's class at S. S.

We are having beautiful weather. All the snow is gone and during the day it warms up just a little. The sun is bright and when the wind don't blow it feels almost like Spring.
Lately I've been awfully hungry by dinner time. Maybe I'll eat a breakfast some of these days.

With lots of love from

Herbert certainly seems like a good son, and I'm glad he so enjoyed The Wizard of Oz, but we can learn a bit more by analyzing his letter home in a little more detail.
Herbert states that he attended the show on the previous Saturday, which is February 6, 1904. On that date, both touring companies were performing in Missouri. Company No. 1 was at the Century Theatre in St. Louis, their last night of a week-long engagement. Company No. 2 was doing a one-night stand in Sedalia in central Missouri.
Herbert saw the show in St. Louis with the original Broadway cast. How do we know this? Well, aside from St. Louis being closer to Indiana, where Herbert was living, he gave us a major clue elsewhere in the letter when he states: "We were out at the fairgrounds Sunday." So, the day after seeing The Wizard of Oz, Herbert and his friends went out to watch the set-up of the Louisiana Purchase Exposition, aka the St. Louis World's Fair, much like Judy Garland's character did in Meet Me in St. Louis (1944) when she boarded the trolley to go check out the progress at the fairgrounds.
Long-time Oz fans take note that when Judy sits down between two young women .57 seconds into this video clip, the woman in pink (on Judy's left) is Dorothy Tuttle, later Dorothy Nitch, who was a long-time member of the International Wizard of Oz Club, married to Oz fan Jim Nitch. Dorothy Tuttle was an MGM dancer who appeared in many films, including The Harvey Girls and The Pirate. Judy sings about half the "Trolley Song" directly to Dorothy Tuttle. Keep your eyes on the woman in pink, if you can take them off Judy Garland.
Below, you can read a review of company No. 1's run in St. Louis. It was printed in the St. Louis Republic on February 1, 1904.

The reviewer concludes: "The music, by Paul Tietjens of St. Louis. is a satisfying feature. There isn't a tiresome song in the piece."
I'm sure Herbert Jarvis could never have imagined his letter home would be shared and dissected a hundred and twenty-two years after he wrote it. But he went to the show and went to the fair, and little else need be said. At least he also had new shoes and trousers for the occasion.
Now, if I had only had time to try and link him genealogically to Royal Historian of Oz, Eloise Jarvis McGraw, this blog would have been a little longer.
Copyright © 2022 David Maxine. All rights reserved.
Posted by David Maxine at 5:59 PM 1 comment: