There has been debate over whether the St. Louis MUNY version of The Wizard of Oz retained any of Paul Tietjens music in its original production, and even more doubt that any Tietjens music remained once the MUNY version began being performed by other "stock" companies. But it's clear from my research that at least some of Tietjens score was still in use in the MUNY version even as late as 1949, and probably later still.

In the summer of 1949, the Louisville Park Theatrical Association performed the MUNY version of The Wizard of Oz—the main credit for music and lyrics going to L. Frank Baum and Paul Tietjens and "Music of recent screen version interpolated through the courtesy of composers Harold Arlen and E. Y. Harburg, and Metro-Goldwyn-Mayer."


On August 2, 1949, the production was reviewed by Boyd Martin in the Louisville Courier-Journal, under a bold headline:

'Oz' Leaves Out Too Much Delightful Music.

You can read Boyd Martin's review below. But what I find fascinating is how loved the original Baum/Tietjens show still was by some people—especially this late, nearly a half century since the show premiered. Martin remembers specific characters and songs, and clearly loved the "original" Wizard of Oz very much. Here's his review of the 1949 MUNY version as performed at the Iroquois Amphitheatre in Louisville, Kentucky.

Mr. Martin found the new production was "not The Wizard of Oz of happy memory . . ."

For book and lyrics of L. Frank Baum and music by Paul Tietjens and A. Baldwin Sloane of the original have been ignored completely for a decidedly elementary book of cheap wit and a score that leaves out some of the remarkably bright numbers of the original extravaganza.

Such delights as "The Bullfrog and the Coon," "That Must Be Love," "It's Enough to Make A Perfect Lady Mad," "Football," "Would You Like to Go Halves on That," and others which composed the musical background of The Wizard of Oz have been dropped from the amphitheatre version for a very inferior series of airs carrying nothing of the satirical import of the Baum conception.

No longer does poor little Dorothy have Imogene, the cow, for a playmate. No longer does Cynthia Cynch wander a comical zany among the Munchkin maidens. And where is Sir Dashemoff Daily, the poet laureate of Oz, The Poppy Queen, and so many other characters that just have to be to make The Wizard of Oz complete?

No one even really seriously anticipates any plot or tangible story in The Wizard of Oz. Anything of the kind would be honestly out of place. Even originally it was just an evening of entertainment to get one in a good humor and keep him that way until the finale.

But the amphitheatre offering is an illegitimate distortion of a once-imaginative conceit which appealed to one's sense of humor, fancy, and eye. No one can say that Frank Gabrielson's modern adaptation is anything but a gruesome attempt to eliminate charm. In that he has succeeded admirably. As far as the score of Tietjens and Sloane is concerned there isn't enough of it retained to matter. The music is chiefly from the recent screen version, interpolated as the program indicates, "through the courtesy of composers Harold Arlen and E. Y. Harburg, and Metro-Goldwyn-Mayer." Had the Park Historical Association known, it could have been sure this loan was no favor.

The lack of theatrical flare or spontaneity in the composition is reflected throughout by the impotency of the players, who working hard enough, failed last night to make the whole thing gel.

Oh, there were some bright moments here and there. A chuckle or two effervesced when Miss Roache [who played the Witch of the West] had tea with her cronies. The idea of the King of Beasts being such a Sissy got what one might consider a lion's share of the laughter. 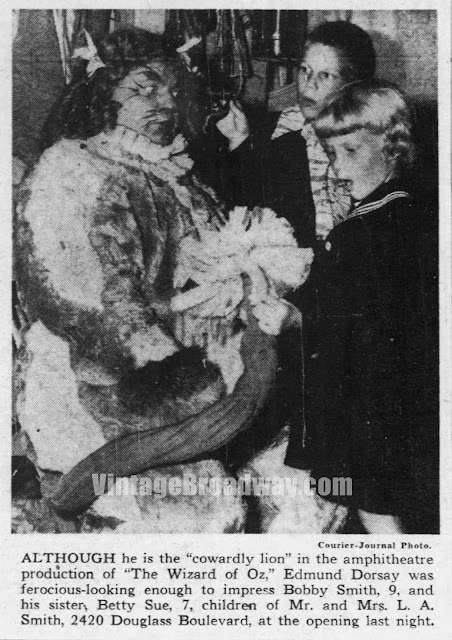 Not until Ray English [the Scarecrow] went into his dance in the second act was there any indication that he was the fellow who boasted last week that he was born to be funny. [Choreographer] Virginia Johnson's dancing routine made lively moments.

Little Edith Fellows [Dorothy] really proved to be something of a wizard herself last evening. She managed to gather some loose ends together when they needed it, which was much too often. But one star doesn't make a heavenly show.


That's the end of the review. So how much of Tietjens music actually remained in the show at this point? A write-up on this production of The Wizard of Oz on July 8, 1949, listed the songs MGM had agreed to license (see image at right).

The production probably used the Tietjens "Selection" as an "Overture," and the "Opening Pantomime" music for Kansas, the Tornado, and Munchkin dance music. They probably utilized the Poppy Scene music (without vocals) and I have always suspected that Tietjens's "Phantom Patrol" was the inspiration for the original MUNY Wizard of Oz "Skeleton Dance."  It's one of Tietjens's best pieces and the title would have lent itself to such a new imagining.

Below is another piece of evidence showing how the MUNY version forced the marriage of Tietjens and MGM into their new performing version. The image below is a scan from the "Conductor's Score" of the Tams-Witmark "rental" parts of the Baum and Tietjens Wizard of Oz production. This section of music is from Tietjens's opening music for the show, "Life in Kansas." In the yellow areas you can see penciled notes showing how and where "Over the Rainbow" was jammed into the middle of Tietjens's music. It says: "Fake ending - arpeggio intro to "Rainbow," then a second notation saying "After Rainbow - Dance Here." Click on the image to enlarge it for better viewing.


Clearly the early MUNY version was a rather bastardized affair. I certainly love the MGM film and score, don't get me wrong. But it's worth remembering how long Tietjens and Baum's extravaganza truly lived in the hearts of its audience—even almost fifty years after Dorothy and Imogene first skipped on stage and into the hearts of the audience—especially one Boyd Martin!