Aside from the wonderful posters advertising the show and a set of tinted postcards, very few color images from The Wizard of Oz exist—thus the picture of Dorothy Gale below has always been one of my favorites.

Of course, it is only a black and white photo made color by the addition of some red ink for Dorothy's dress and a rosy hue to her skin, but it is still effective. In the show Dorothy did indeed wear red for the first and second acts.

This photo is of Dorothy's costume as it was redesigned for Broadway by Caroline Siedle. In the Chicago premiere Dorothy wore a white dress with red polka-dots and a solid red apron. The switch to a white apron with tiny red dots over a solid-red dress is much stronger visually. 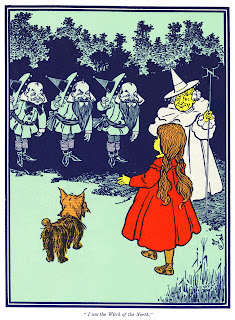 I suspect that the the idea of Dorothy wearing red came from W. W. Denslow's illustrations of Dorothy in the original book, where she is wearing red when she arrives in Oz.

Anna Laughlin (as Dorothy) would have been a primary focal point (as the star should be) as the only person in red, walking through the blues and greens of the Munchkin Country set and the "Road through the Forest" set (where she meets the Tin Woodman) and looking really smashing in the all green and glittery Emerald City set.

In the Emerald City many of the costumes had red in them. It must have looked like Christmas! In the "Ball of All Nations" some of the chorus costumes were all red, at which point Dorothy changed into a sporty black and white Pierrot costume.

For those curious about the piece of paper Dorothy is holding in the photo, it is the love song written for her by Sir Dashemoff Daily, Dorothy's future love-interest.

I only have a clipped-out version of the large color photo of Anna Laughlin above. It was originally published March 21, 1903, in the magazine section of the Commercial Advertiser, a newspaper in New York City at the time (see below).

This is one of the rare occasions when "red ink" is fun!