Bang on My Chest If You Think I'm Perfect!

There is a lot of mistaken information online and in books about the original Broadway musical The Wizard of Oz. Some of it is simply from passing on other people's faulty research—and some of it is just made up crap such as pollutes the Wikipedia entry on the show.

Researchers and writers on vintage musical theatre, on The Wizard of Oz, and on L. Frank Baum have often relied solely on secondary sources—and then the research begins to take on a life of its own. It's like that old party game of whispering a secret phrase in someone's ear such as "Mary has a crush on Bart." And by the time the secret makes it around the room, evolving as it passes from person to person, it has morphed into "Harry wrecked mom's car!"

One of the most common mistakes people have made (and continue to make) is mislabeling photographs, misidentifying actors and actresses. Such erroneous photo identifications appear in books, at major institutions, and they litter the internet. Every picture of the Cowardly Lion is not Arthur Hill, every Scarecrow is not Fred Stone. 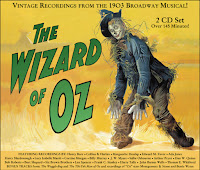 Before I start trying to fix everyone else's errors I think it best to clear up a couple of my own, all from my Grammy Award-nominated 2 CD set Vintage Recordings from the 1903 Wizard of Oz.

On page 4 of the booklet called "The Records" appears a photograph of the Wizard and a man drawing a sword, whom I mistakenly identified as Pastoria. The man drawing the sword is actually Harold T. Morey as Brigadier-General Riskitt (in disguise) at the beginning of Act II.


In the same booklet, on page 19, I feature a photo of the Wizard's all-girl Phantom Patrol. I should have made clear that my description of the "Phantom Patrol" scene only refers to the pre-Broadway version of the show. 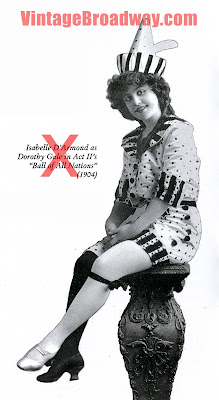 For the Broadway version of the show (seen in the photograph above), a much more plot-oriented pantomime was developed by Julian Mitchell.
One of my most embarrassing mistakes occurs in the centerfold of the other booklet, "The Lyrics."

In 2003 I wrongly believed this to be a photograph of Isabel D'Armond, who played Dorothy in Company No. 2. The costume is from the "Ball of All Nations" scene in Act II.

But the young woman in the photograph is in fact Anna Laughlin, the original Dorothy.

When I first acquired the photo I don't think I'd ever seen Anna Laughlin in that costume before, and the teeth and the smile looked to me much like Isabel D'Armond.

I really like the photo. You can see the uncropped original image below.

In the synopsis of the show on page 3 of the "Records" booklet I wrote that the Good Witch of the North sends Dorothy home to Kansas. This was based on a synopsis in the original Broadway program. But that January 1903 synopsis was written before the Broadway script was finalized, and from the premiere on, Dorothy does not return to Kansas. She remains in Oz with her sweetheart Sir Dashemoff Daily.

As long as I'm pointing out these few errors I will mention one typographical error, too. In one place in the booklets Sir Dashemoff Daily accidentally became Sir Dasmeoff Daily. And I failed to mention that the photo of Bessie Wynn in the kilt—in the section on non-Wizard of Oz recordings by Miss Wynn—shows her as Tom-Tom in Babes in Toyland.