Don't Have a Cow! 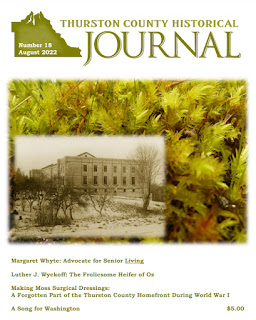 I am delighted to report that in the latest issue of the Thurston County Historical Journal, I have an article published, entitled "Luther J. Wyckoff: The Frolicsome Heifer of Oz."

Wyckoff joined The Wizard of Oz company in fall 1902 for the post-Chicago tour, where he played one of the Wizard's wisemen, among other chorus parts. In the summer of 1903, he took over the role of Imogene, after both Ed Stone and Joseph Schrode were left exhausted from playing Dorothy's devoted little bovine.

Wyckoff went on to play Imogene for almost two years with company two.

You can read all about the "frolicsome heifer" in the online version of the journal by clicking here.

My article came about after my husband, Eric Shanower, ran across an article by Mary Paynton Schaff in an earlier issue of the Thurston County Historical Journal, relating the story of Luther J. Wyckoff's later career as a hybridizer of lavender. You can read that article by clicking here.

I used the photograph below in my article on Wyckoff. It is my favorite of the various backstage photos I have. I acquired it in the late '90s when I bought three bound volumes of the New York Tribune from 1903—this photo appeared in the September 20, 1903, issue.

I immediately loved the photo. It shows such an intimate moment backstage: the two sweaty young men having peeled down their animal costumes, the look Arthur Hill is giving to Wyckoff as he wipes the perspiration from his neck, and it's a good shot of the Imogene head.

Curiously, it was only after I started writing the article that I realized that it was Luther Wyckoff in the photo. I had always assumed it was Joseph Schrode (the second Imogene)—though it looks nothing like him. It looks even less like Ed Stone (the first Imogene), who was short with a very round face. But after discovering the Wyckoff lavender article and seeing multiple photos of Wyckoff, I quickly realized that it was he in the heifer's costume above.

I was also able to identify another photo of Wyckoff from earlier in the Broadway run, when he was credited as playing a Munchkin Youth (he would have also played other male chorus parts). I did not use the photo in my article, as I thought it would reproduce too poorly.

I have extremely good copies of the various Byron stage photos of The Wizard of Oz. But Wyckoff, as one of the three male Munchkins, is in the back row and the camera was not focused on him. I have sharpened the close-up (above) as much as I dare. Below, you can see the full stage image.

I hope you'll go read my article on Wyckoff now.  If you like, you may order a physical copy of the journal. See the instructions in the forematter of the viewable PDF.