A Simple Little Girl from the Prairie 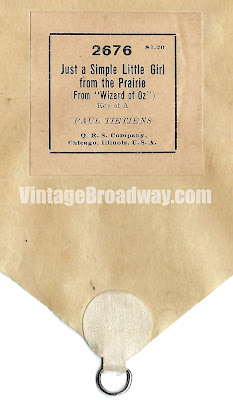 A few weeks ago, I picked up another piano roll from The Wizard of Oz. The roll was produced by the Q-R-S Company and features "Just a Simple Little Girl from the Prairie" composed by Paul Tietjens.

The immediate curiosity is that the title differs slightly from the published sheet music, "I'm Just a Simple Girl from the Prairie." This song, written by L. Frank Baum and Paul Tietjens for the original Chicago production of the show, is not listed in programs as having been performed. But that is because the song forms part of the seven-and-a-half-minute long finale of Act II.

Julian Mitchell cut the Baum/Tietjens Chicago finale of Act II for the Broadway opening, replacing it with a new Act II finale by A. Baldwin Sloane and Glen MacDonough called "Star of My Native Land."

Tietjens was not pleased - and Julian Mitchell may not have been wholly pleased either, as by late summer of 1903, he devised a new Act II Finale by combining both the Sloane and Tietjens compositions. Thus, "Simple Girl" was reintroduced to the show, where it stayed through the final touring performances in 1909.

The Q. R. S. piano roll company was founded in 1900 by Melville Clark, who had invented the modern player piano. He was also the Clark of "Storey & Clark," fine piano makers. Q. R. S. released a number of titles from The Wizard of Oz in addition to this one, including "When You Love, Love, Love," "I'll Be Your Honey in the Springtime," "Sammy," and, of course, the "Selection," a medley of songs and music from Tietjens's score.

I have not had a chance to listen to this new roll yet. This is a "65-note" piano roll, thus it will not play on most modern player pianos. Once I have been able to play it, I will share a recording here on the blog.

If you have any piano rolls from the early Wizard of Oz stage musical, I would love to hear from you in the comments or by email.