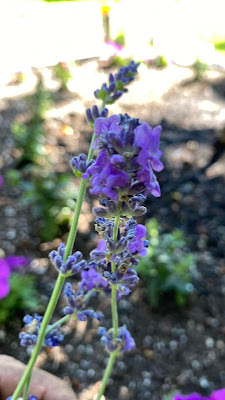 I am most sorry for the long time between blog posts, but much exciting work has been going on behind the scenes regarding my 1903 Wizard of Oz book project. I'll share more about that next post.

But in the spring and early summer, my energies are also split between work on the book and work in the garden. Lately, the 1903 Wizard of Oz has found its way into the garden, too.

You might recall a blog post from early February about Luther Wyckoff, who played Imogene, the frolicsome heifer, on Broadway for a few weeks and then for two full seasons with Company No. 2. Wyckoff had begun his association with the show as a member of the male chorus in the summer of 1902 before putting on hooves as Imogene.

Now, as mentioned in the earlier post, Wyckoff abandoned the stage after his two-plus years as Imogene and in the ensuing years began in-depth research into growing lavender in the Pacific Northwest. He went on to develop his own two cultivars, "Wyckoff White" and "Wyckoff Blue," which were selected and are still used by Yardley of London—makers of the famous soap.

Upon learning all this, my husband Eric asked the inevitable question, "Are you gonna start growing Wyckoff lavender in the garden?" Of course, the answer was "Yes."

I began my search and had little luck finding it available for order online. But I placed a request at my local nursery and a couple weeks ago my "Wyckoff Lavender" arrived. 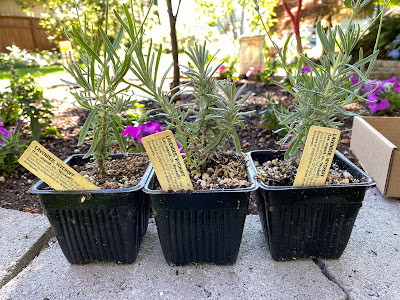 The plants are not particularly large, but they'll get bigger. So, there is now "Oz Collection" growing in the backyard. What will I do with the lavender, you ask? Well, some might go into cooking, but perhaps I should create some 1903 Wizard of Oz collectibles . . . anyone want a small Imogene the Cow sachet stuffed with "Wyckoff" lavender blossoms? 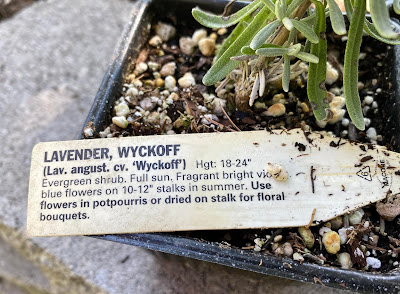