The Wizard of Oz in London

From the earliest days of The Wizard of Oz stage show, the producers tried to get the show to London.

David Montgomery, who played the Tin Woodman from the premiere of the show in June 1902 until May 1906, spent his summer vacations from the show in London. He also tried to interest British producers in The Wizard of Oz. The reports back were always optimistic, but the plans always came to nothing.

Perhaps the probable lack of Montgomery and Stone squelched the deal. David Montgomery would have loved to have taken the show to London. He seems to have much loved his time spent across the pond). But Fred Stone, on the other hand, hated sea travel. He suffered from motion-sickness, and after he returned from England in Spring 1902, he declared he would never cross the ocean again.

There were additional proposals for doing The Wizard of Oz in Paris . . . in Berlin . . . in Australia . . . but all came to nothing.

Exactly why is hard to say. Some contemporary reports theorized the transfer failed because several West End shows had already stolen some of the most popular songs from The Wizard of Oz's score—but this seems an unlikely reason—Hamlin and Mitchell easily replaced "Sammy" in the United States with several successors: "Can't You See I'm Lonely," "The Tale of a Stroll," "Are You Sincere?"

Perhaps the show was just too American, too different.

But when the MGM film version of The Wizard of Oz premiered in London in December 1939, the story and songs and technicolor were a wonderful escape from the World War that England had entered three months earlier. The film spawned an interest in a stage version, perhaps a splendid holiday pantomime!

On September 6, 1940, Paul Tietjens received a letter from Sargent Aborn [1867-1956], head of Tams-Witmark, "regarding new prospect of London production of Wizard." Aborn had also written to Maud Baum. Tietjens replied that he "thought it best to interview Samuel French myself, which seemed to upset [Aborn]. I said I would wait until he had Mrs. Baum's reply."

I've found no further record of what transpired in the correspondence hereafter. And I am not wholly sure why Tietjens wanted to talk to Samuel French. Perhaps Samuel French was handling the Tams-Witmark catalog in England? Or did the Brits want to use the script of the "Junior League" Wizard of Oz play that Samuel French had published in 1928, but with Tietjens's score?

It is not clear when this production was to have been scheduled. But on the afternoon of September 7th, the day after Teitjens got the letter from Sargent Aborn, German planes appeared over London. The "Blitz" had begun, and no doubt, the London premiere of The Wizard of Oz was going to be delayed.

The "Blitz" lasted until mid-May 1941. Finally, a little over two years after the original inquiry into obtaining the stage rights to the Wizard of Oz extravaganza, the following announcement appeared in the December 24, 1942, issues of The Stage:

The Wizard of Oz will be the Christmas attraction at the Grand, Croydon, where it will continue for an indefinite season. The performance on Boxing Day [the day after Christmas] will mark the first production of the dramatized version in this country. Produced by John McCormick under the supervision of Reginald Fogwell, the company include Gus Chevalier (Cowardly Lion), Max Adrian (Scarecrow), Rolfe Slater (Wizard of Oz), Donald Ferguson (Tin Man), and Lorna Dean (Dorothy), supported by Marjorie Page, George Hurley, and Dorothy Kendall. The corps de ballet of the Allied Ballets, with their premiere danseuse, Mela Carter, and Helena Sidonova, Sonia Arova, and Ronni Martin, are in support with new ballets designed for this production by choreographer Jashf [sic] Crandall.

The cast list does not list any character names beyond the typical Wizard of Oz principals that an audience would know from the film version, but the show is clearly represented as being the American stage show. The most important name in the cast is Max Adrian [1903-1973] as the Scarecrow. One clue that this production may not have been following the Baum script very closely is the casting of film actor and comedian Gus Chevalier as the Cowardly Lion—originally a silent part in the stage show.

The following advertisement appeared in The Norwood News on Christmas day 1942. 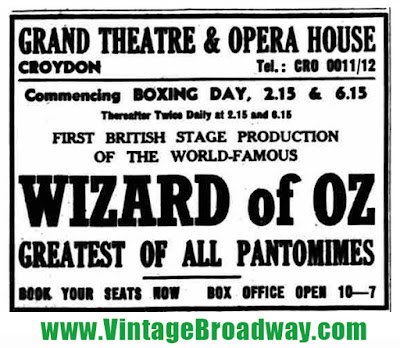 I have not been able to locate any reviews of the Croydon Wizard of Oz that might tell us exactly what they did, how closely it followed the American stage version. But the show was a hit!

On January 8, 1943, The Norwood News reported: "Owing to previous bookings, the present highly-successful run of The Wizard of Oz must end on Saturday, January 16 . . ."

Back in the United States, Paul Tietjens was living in New York City, his finances were fairly tight, and he was suffering from bladder cancer—he had already had surgery on his prostate. In May, Paul and his wife Marjorie moved to St. Louis to be with his sister and her husband. Paul Tietjens died a few months later on November 25, 1943.

In his obituary, the St. Louis Post-Dispatch of November 26, 1943, reported: "The Wizard of Oz has been produced from time to time since its initial success in 1902. Mr. Tietjens received a royalty check several weeks ago from Croydon, England, where the old play was revived."

The Wizard of Oz became a popular holiday pantomime in London. The following year they switched to the MGM score, though they may have continued to use Tietjens's incidental music. Baum's script was out, a new script having been written by Janet Green. But the holiday pantomimes retained Paul Tietjens's name as creator.