Scene 3 - "The Ruby Palace of Glinda the Good"

As Dorothy and her friends are carried aloft in the balloon by the winged monkeys the stage fades to black. Baum has suggested a "dark change" to shift the scene from the "Rocky Hill of the Hammerheads" to the "Ruby Palace of Glinda the Good." Baum's request for a more fluid scene change here is quite forward-looking. For once he is actually trying to keep the action moving and the audience in their seats.


The lights come up to reveal Glinda, seated on a large ruby throne (center right). Standing beside the throne are Glinda's four white-bearded wisemen: Socrates, Pericles, Sophocles, and Chumpocles. At curtain up, Glinda's all-girl bodyguard is marching and singing:

Although you may not think we're a very military band
We are held in high esteem by the people of this land,
For wherever we are seen, ev'ry body knows at once that we
Will defend our Glinda's person from the least indignity.

We are the body-guard of Glinda, the Good;
We shield her from her enemies as good soldiers should;
For nothing can harm her while we are on duty,
To save her from molestation it is understood
We'd die for her willingly—we really think we would.


Tietjens's music for this march is not known to survive; and as usual Baum's lyrics give mediocrity a bad name. These shapely girls, executing a military drill, will eventually morph into the Wizard's all-girl bodyguard, the Phantom Patrol, in the produced version of the show.

At the end of the song Glinda notices "a strange whirring noise in the air" and asks her wisemen what it might be.

The four wisemen, each bearing a large book, debate the issue with typical Baumian humor:

SOPHOCLES: One moment, your highness. It is set down here in my book of magic lore that if any people are strangers, it is because they are unknown and if they are unknown, your majesty, how can you expect anyone to know who they are? That's the point.


Irritated at such rationale, Glinda threatens to discharge the whole lot of wisemen next Saturday night.

CHUMPOCLES: Stay, your royal highness, I have just found out from my marvelous book of magic that there is approaching a man of tin, a man of straw, and a girl.


The other three wisemen cry out eagerly, "A girl?"

GLINDA: That will do. You are tiresome. These strangers are at the door. Admit the man of tin.


The Captain of the all-girl body guard ushers in the Tin Woodman, who immediately begins making love to Glinda and offers her his heart: "See, beauteous queen, I kneel, and lay it at your feet." Glinda will have none of it and asks for the man of straw to be admitted. The Scarecrow offers Glinda his brains.

GLINDA: A heart first, and now a lot of brains! These people must think this is a butcher shop.


Finally, Dorothy is admitted to the throne room.

DOROTHY: Please, your highness, I want to get back to my home in Kansas. I was blown away by a cyclone and I've never been able to get on the right road since. . . . there are too many strange and terrible things here for a simple country girl like me to ever get used to it. I might get used to the cyclones in Kansas but the Fighting Trees and the Hammerheads worry me.

GLINDA: You shall have your wish, child, I will send you home to Kansas. . . . As for this Scarecrow—

SCARECROW: Here's where I get it again! If no one is going to appreciate my brains they will be as useless to me as was the pie to the hungry traveler.

GLINDA: What was that?


The Scarecrow has just cued in "The Traveller and the Pie," a song Baum and Tietjens had written for the "Tramp Chorus" in The Octopus a few months earlier. Despite being rather forced into the plot like this, the song will become a permanent part of the score. This original version of the lyrics from The Octopus has a much stronger narrative through-line than the song will eventually have when it becomes more of a nonsense song than the fable it is here:

SCARECROW: One day a weary traveller walked down a country road—

SCARECROW: I think he did.

SCARECROW: His circumstances were reduced, and his appearance showed—

SCARECROW: I think it did.

SCARECROW: With hunger he was suffering; it was an old complaint. He'd tramped upon the highway till he felt used up and faint, and he uttered words that couldn't be endorsed by any saint—

SCARECROW: I think he did.


The song continues with the traveler approaching a house. He asks the young wife for something to eat. She offers him her freshly baked pie, which gives the traveler food poisoning. The traveler flees the young wife, in worse shape than he was before. [A sound file with lyrics will be posted soon.]

During the song the Tin Woodman has been carrying on, flirting with the chorus, trying to kiss girls, etc., when he suddenly turns around at the end of the song, having misplaced his heart.

SCARECROW: Why didn't you keep your chest buttoned?


Everyone begins searching for the missing heart. The Scarecrow finds it after stepping on it.

TIN WOODMAN: Well, that's a fine looking heart, isn't it? Who will ever accept it now?

CAPTAIN OF THE GUARD: I might be induced to accept it. 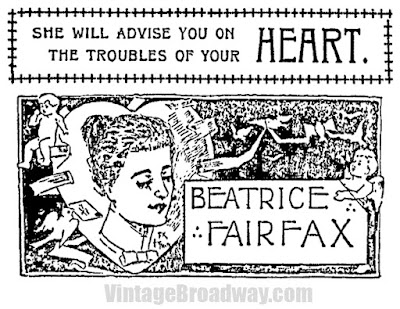 "Dear Beatrice Farifax" was the first-ever advice column. Begun in July 1898, it was essentially the "Dear Abby" of the early 1900s, written by Marie Manning [1872-1945]. The column was further lampooned in Babes in Toyland in the song "Beatrice Barefacts."

CAPTAIN OF THE GUARD: Don't you remember me? I am the little Munchkin girl you once loved.

TIN WOODMAN: And are you my own little itsy bitsy popsy wopsy?


The Tin Woodman sings the chorus of "When You Love, Love, Love." The chorus softly repeats the refrain while the Captain of the Guard explains:

Give me the heart and I'll try to take better care of it than you did. And now for a surprise. When the Wicked Witch died I was made Queen of the Munchkins, and when we are married we will return and rule over our people.

SCARECROW: That puts you in the king row. (Enter Guardian of the Gate) Hallo, here comes the boy with the green fringe on his picture. What train did you come in on?

GUARDIAN OF THE GATE: I come from the Emerald City, your majesty.

SCARECROW: Your—what's that? No, nix. Don't hand me any of that conversation off the top shelf. There's the majesty over there. He's the only face card in the deck around here.


This exchange is the first example of Baum using a "playing cards" motif in the show. Baum will greatly expand this conceit below and in the forthcoming script revisions and lyrics. It will even be played up in the costume designs of the produced show.

GUARDIAN OF THE GATE: (To Scarecrow) No, your majesty, I mean you. The Wonderful Wizard has run away. When he went away in the balloon, he left a letter saying we should make you our king. The people have sent me to bring you back to your throne.

SCARECROW: (Strutting up and down, etc.) Oh, I guess I'm pretty bad, eh? Why, everybody seems to draw a king here. Your majesty (to Tin Woodman), shake hands with my majesty. Us kings will have to stick together. We seem to take everything on the table.

TIN WOODMAN: Yes, we have such a taking way.


Here the Tin Woodman and chorus sing the song "He Had Such a Taking Way." The music and lyrics are not known to survive.

GLINDA: Well, everything seems to be turning out splendidly. (To Dorothy) You ought to be proud to have two kings with you.

DOROTHY: They're all right to draw to, but I wouldn't bet much on this pair. I'm not proud. I don't want to be a queen.

Oh, the maid that minds the dairy
Is the farm-yard dignitary
And her rule is arbitrary
Where the meek-eyed heifers browse;
All the day she has to putter
Skimming cream and churning butter,
And at twilight out she'll flutter
With her pail to milk the cows.

So, boss! so, boss! so boss!—so!
Don't be cross or make a fuss
But let the sweet milk flow!
Never kick or mind the flies,
Switch your tail or blink your eyes—
You'll be good if you are wise—
So, boss!—so!

Baum must have been fond of this lyric as he included it (with a few subtle changes) in his 1910 anthology Baum's Juvenile Speaker, reprinted in 1912 as Baum's Own Book for Children. At least some of the music for the song will be reused by Tietjens in the finale of Act I in the show as it is eventually produced.

DOROTHY: I'm anxious to get home as soon as possible, for I'm sure everyone will be worried about me. Will you tell me how I'm to get back to Kansas?

GLINDA: The Silver Shoes will carry you. You have but to knock their heels together three times and they will transport you in a jiffy to wherever you wish to be.

GLINDA: Then allow us to bid you adieu and to speed you with our best wishes. And when you are home again do not forget us.

DOROTHY: No, indeed! The friends I have met in this country of witches and wonderful wizards I shall always bear in loving remembrance.


The entire cast then performs a "Grand Finale" consisting of several of the catchiest airs sung by principals and chorus. After the finale, Dorothy knocks the heels of her shoes together three times and disappears. Then follows a "Transformation Scene" showing Dorothy on the Kansas Prairie, clasped in the arms of her Aunt.

Julian Mitchell tossed the overwritten and unstageable script aside. The beautiful and colorful children's book sparkled with possibilities, but could L. Frank Baum turn it into a viable work for the stage?