People have been asking me for quite a few years now how my book on the 1903 Broadway Wizard of Oz musical is coming along. I am delighted to inform you that I am finally in the actual writing phase after two plus decades of very intense research.

There has been a lot of research. I probably have the largest private collection of vintage photographs from the show, including a dozen "original" Byron photographs of the Broadway production, a spiffy collection of memorabilia from the show, and over a hundred programs and handbills detailing cast changes and song line ups. One box contains well over a hundred pieces of sheet music. My collection holds many original recordings on disc and cylinder, too. But the treasure for the creation of the book is my newspaper research file.


There are over twenty binders at this point holding more than 10,000 newspaper articles about the show and its cast. Then there are the four surviving scripts, boxes of orchestrations, many, many pieces of sheet music, the composer's diary and his surviving manuscripts, scrapbooks assembled by the cast and staff of the show (plus their personal papers), and, well, that's a lot of material to digest! And you wondered why it was taking so long to get to the actual writing of the book.

That is one reason for this new website. In addition to drumming up interest in my project and whetting your appetites a bit, I plan to use this space to rough out ideas, get feedback, and in the end it will allow me to build the core of the book in a way that allows me to keep modifying the ideas, text, and information as I travel down the yellow brick road to completion.

The book began as a restoration of the script and score. But the scope of the project has shifted and changed significantly over the last two decades. In 1998 I met James Patrick Doyle and we began the process of creating a new performing version and I wanted to write a book to explain the quirks of the show, to give context for the new performing version. But in 2002 James suddenly died and the restoration project sort of collapsed.

The research continued, though (see above!), and the book project acquired a new depth. I wanted to place the show in history, to make it come alive for the reader. Context is everything! I also want the book to be utterly sumptuous - to be an Extravaganza! It is now planned as an oversize coffee-table book with a detailed history on the creation of the show and its creators. It will include a script for the show incorporating every bit of business, description, and backstory I have found. You will see intricate explanations of the show's magnificent special effects - all of this presented in the most elaborate package possible.

So, why not subscribe to the blog and follow along as we explore the development of the show that made The Wizard of Oz one of the most beloved stories in the world. 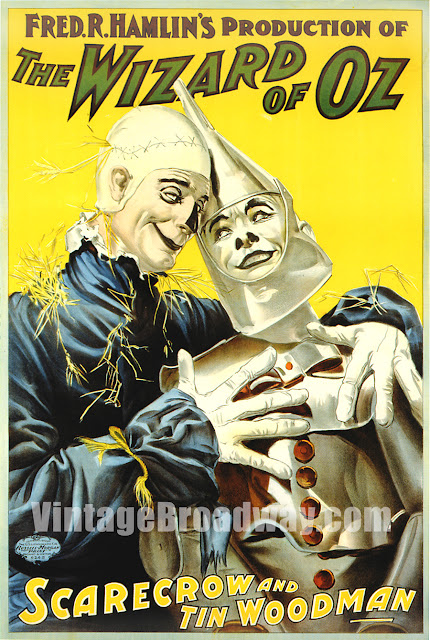